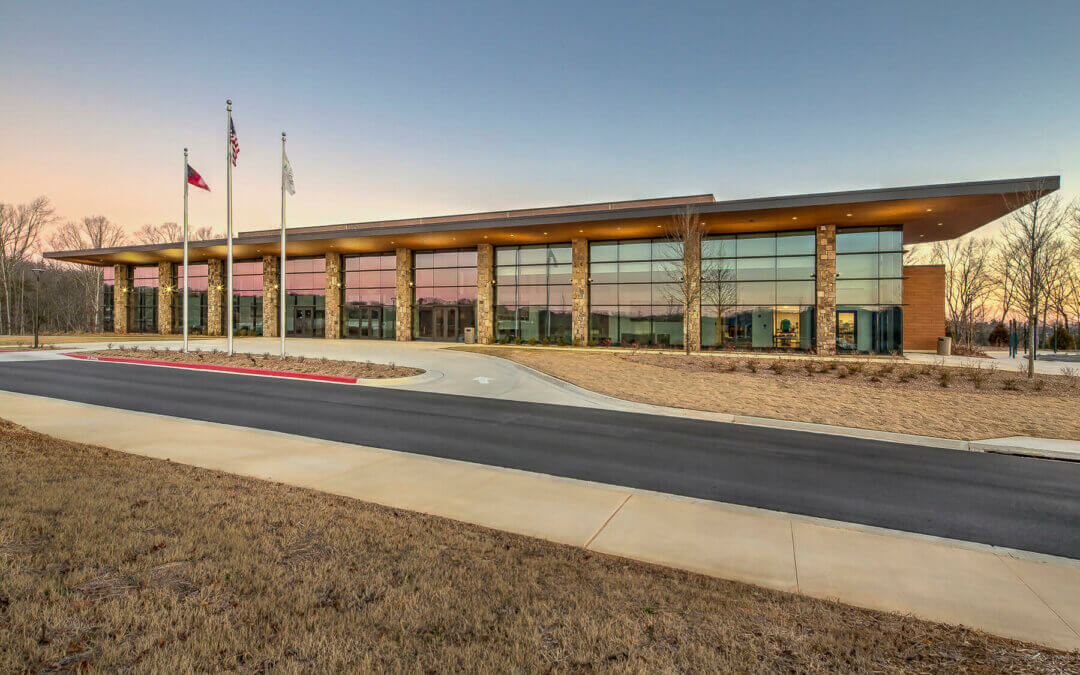 This article was written by Tim O’Connor, Senior Editor for Knighthouse Media, and appeared on Construction Today.

When Lanier Technical College announced plans to build a new campus in Gainesville, Ga., New South Construction saw an opportunity to become involved in another high-profile project in the state. The Atlanta-based general contractor had relationships with the Georgia State Financing and Investment Commission, which manages the funding for the project, and the state’s larger technical college system, however, it had not previously worked with Lanier Tech. New South Construction created a joint venture with Carroll Daniel Construction, a fellow firm located in Gainesville that had completed jobs for Lanier Tech in the past.

In Carroll Daniel Construction, New South Construction found a like-minded partner that shared its integrity and emphasis on safety. “Our two firms are really right there together,” Project Director Jeff Brown says. “Both our businesses approach projects the same way, we have the same ethics and integrity.”

Combined, the joint venture assembled the ideal team for the new campus project. New South Construction broke ground on the campus in fall 2016 and construction on the first building began in February 2017. As of March, the structures for all six campus buildings were completed and the team was prepared to start turning over one building for partial occupancy each month beginning in April. The campus is on schedule to open in January 2019. “The experience of both firms has allowed us to be successful on this job and is why we thought it would be a good fit for us,” Brown says.

The six structures that will make up the new campus include an administration building; an instruction building for classrooms; an industry building for applied technical programs such as welding, motor and diesel mechanics, etc; a health building for medical classes; an economic development facility that will also house the campus’ central plant; and a 46,000-square-foot conference center with a ballroom suitable for conferences, training events and trade shows. The campus is being built on 94 acres and will eventually be home to 5,000 students.

The scope of the project has increased significantly since its initial planning, largely thanks to the generosity of a donor who provided Lanier Tech with the additional land to build the conference center. To take advantage of that opportunity, along with additional funding from the State of Georgia, the college increased its original budget from $75 million to $93.9 million.

The land donation made the conference center possible, but it also presented one of the biggest challenges to the project’s timeline. The conference center sits on a hill at the edge of a scenic lake, promising to deliver beautiful views that will heighten wedding day experiences and give weary professionals a needed mental break from marathon panel discussions. However, the lakeside location meant there was an abundance of rocks littered throughout the hill, complicating the ability of the grading operation needed to level out the hillside for the footprint of the new conference center. To solve the issue, New South Construction had to remediate the bulk of the rocks.

The unpredictable weather has been another factor. The Atlanta metro area has been hit by several snowfalls this winter, including a storm that shut the city down for several days in January. Construction progress stalled briefly because the unexpected snow made it unsafe for crews to travel to the job site.

The snow soon melted, however, and worked resumed after a few days. The storm left the ground soaked, forcing New South Construction put in temporary gravel roads to give vehicles better traction and make the site accessible. The company also worked with its subcontractors to adjust schedules and get back on track quickly. The project’s steel contractor began working six days a week to install the exterior framing, and the drywall vendor added manpower to complete its work more quickly. “For us on the construction side, the ability to maintain schedules comes from the opportunities to expedite schedules at the appropriate times during construction – either through weather advantages during dry periods or after buildings are dried in,” Brown says.

Because all of the labor on the project has been contracted out, the subs are instrumental in maintaining the schedule. As many as 50 subcontractors are involved with the project, with an average of 300 workers per day on site. “There’s definitely a lot of entities touching this job,” Brown says.

New South Construction chose its subs through a bidding process, but it was selective about which firms it invited to submit proposals. “Due to the size of the project, we were selective in the subcontractor and material vendors that we solicited for pricing,” Brown explains.

Although the project consists of six structures plus the development of the campus itself, New South Construction chose to treat it as one large project instead of seven smaller jobs. As such, the chosen subcontractors – except for the drywall vendors – are working on all of the buildings in sequence. New South Construction developed the schedule so that two buildings are always in roughly the same stage of progress. As each set of structures finishes a phase of construction, subs move on to the next set of two buildings, giving them a steady stream of work until the entire campus is completed.

The consistency between subcontractors made sense because the buildings all share similar design features such as light fixtures, carpeting and finishes. The experience completing installations in one building helps work on the next building go more quickly. “Overall, it’s definitely been a success with the progressive flow we’ve set up with a two-sets-of-three approach,” Brown says.