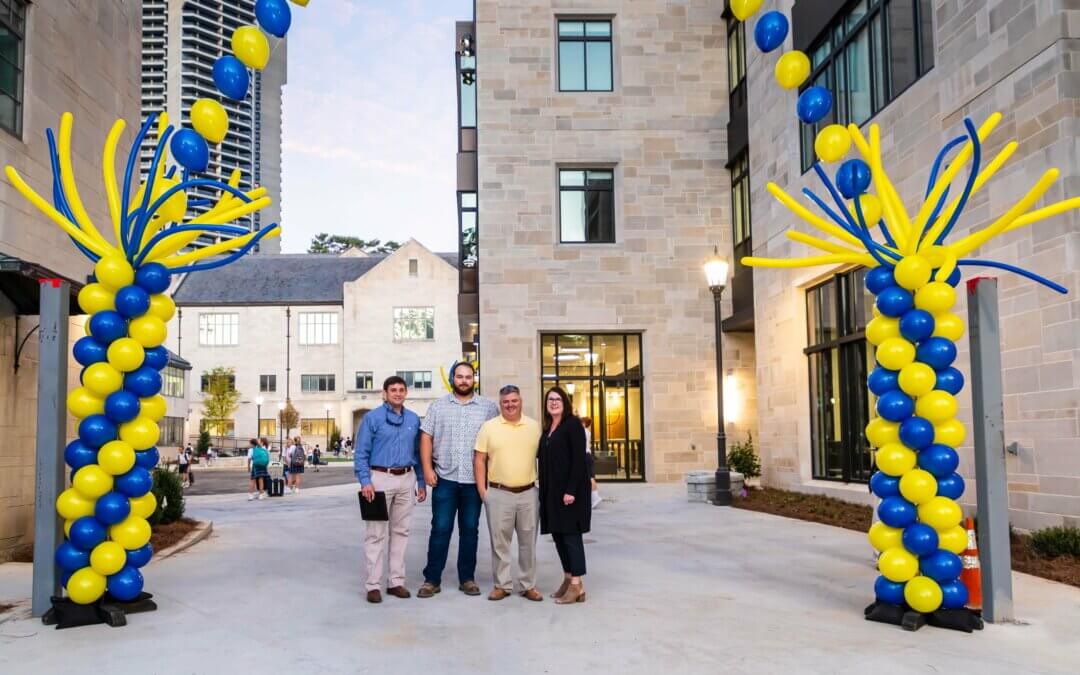 This article was written by Andrew Nelson for The Georgia Bulletin

The new $25 million, 48,500-square-foot Hyland Center at the Cathedral of Christ the King, Atlanta, serves the church and its parish school. The new structure is three times the size of the original center that opened in 1952.

Science teacher Chris Weisner, of Christ the King School, doesn’t worry now about whether his students get enough hands-on time doing experiments or where to store his prep work.

“It’s going to springboard kids to get ready for high school, college,” he said. Weisner said two new science labs in the recently completed and enriched Hyland Center rival any he’s seen in a high school. Exposure to lab experiments will get students geared toward careers of the future, he said.

For members of the Cathedral of Christ the King parish, ministries will no longer compete for coveted meeting space or be forced to spend money to rent other places to serve believers with faith programs.

“I’d have to say no to ministries. We didn’t have the space for their first meeting,” said Kathy McCormick, the director of faith formation and evangelization at the cathedral. Now, the new Hyland Center has more room, enhanced technology, and greater flexibility to serve the 5,282 families at the parish.

The parish is already planning for youth retreats, considering how to better serve adults and getting requests for national Catholic conferences, she said.

The new $25 million Hyland Center is to be dedicated on Sunday, Nov. 24, the latest addition to the campus of the Atlanta Archdiocese mother church.

A special community-wide event at the Peachtree Road parish will bring together the school and parish to officially open the limestone center. Among the honored guests will be representatives of the Grey Nuns of the Sacred Heart, the religious community of sisters who taught for many years at the nearly 600-student school.

The original center was opened in 1952. It quickly became the hub of parish and school life.

“Everything happened in the Hyland Center. Everybody has a sentimental affection for the old Hyland Center,” said pastor Msgr. Frank McNamee.

The building hosted the archdiocesan synod after Vatican Council II. Weddings were toasted here. Kindergarteners learned here. Diverse Catholic traditions, such as the Christmas custom of the wandering Joseph and Mary in Los Posadas, took over the meeting hall.

“It was being used all day, every day, seven days a week,” said Kim Sheppard, the cathedral’s director of operations.

But during the past 30 years, the school and parish were increasingly aware the building was out of date. It was bursting at the seams as the community grew. A campus review several years ago confirmed what everyone thought and the decision was made to replace it.

Keys were turned over to the construction team in April 2018. The final beam was put into place for the symbolic topping-off ritual in March. Students moved into the new building Wednesday, Oct. 16.

The center was designed with the work of architects Collins Cooper Carusi and built by New South Construction.

The planning phase brought together parish and school leaders as they teamed to build an innovative educational building. They learned from other schools, churches and organizations with similar projects to see the latest features and configure them to their needs. Students and faculty tested desks and other equipment before decisions were made to purchase them.

The building is close to three times the size of the original building. About half of the exterior stone is preserved from the first center.

Builders included keepsakes, linking the old and the new. The stone cross and the dedication stone from the original center are displayed at the entryway. A portion of the preserved original basketball court hangs on the wall. Designers reused a section of the old wooden bleachers and repurposed it with a cross display.

The ground floor is dominated by a regulation-size gymnasium, which is below the street level. It is the largest worship space on the campus, with room for some 1,500 people. (Some 650 people would fill the cathedral.)

Two floors are dedicated to the Christ the King School middle school, instead of its former single hallway. Planners made use of a rooftop to create an innovative outdoor space with artificial grass, called the East Wesley Lawn. Elevated above street level, the rooftop has views of nearby high rises and churches of the Buckhead neighborhood.

Eight new classrooms give students and faculty space to create and learn. Architects built the classrooms with glass, creating hallway hubs for students to collaborate in small groups. The rooms will also be available for ministry programs and other parish needs.

In addition, there is a larger music room and broadcast rooms, expanded science labs, a teacher collaboration room, and a multipurpose room served by a catering kitchen.

Peter Schultz inherited the nearly-completed project when he took over as the school principal this summer.

“Every single student in the school is going to use this building,” said Schultz. The whole school is enjoying it every day. This was student-centered in many ways. There’s so much here.”