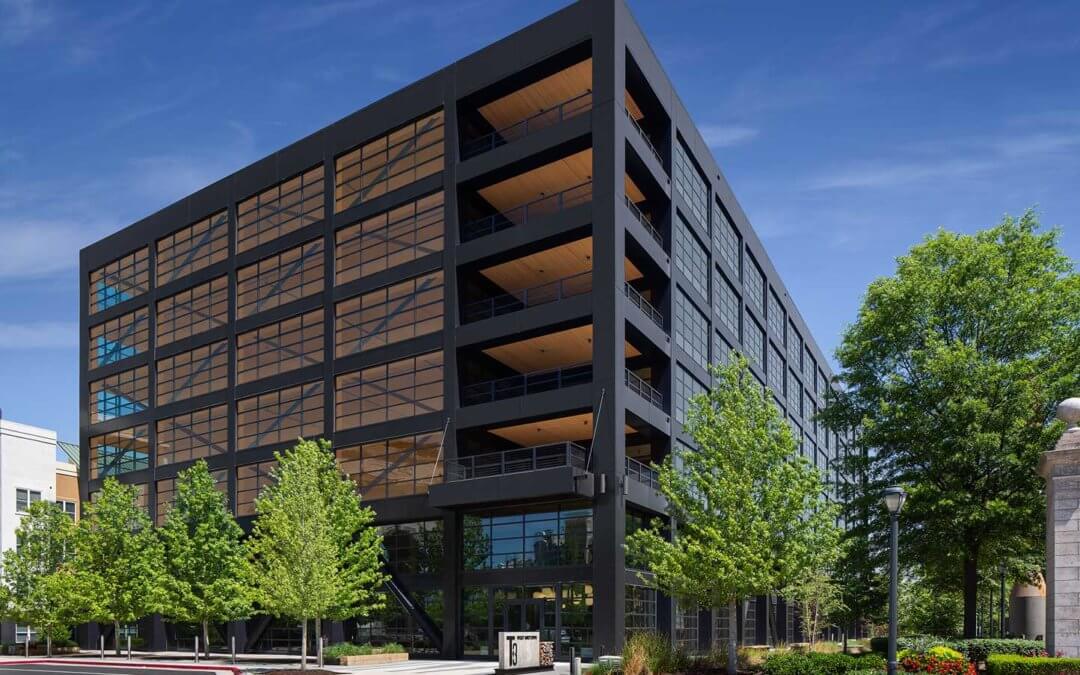 Atlanta covers 136.7 sq. mi. and is geographically grouped into distinct, yet unofficial, districts including Downtown, Midtown, Westside, and Buckhead. The districts are further divided into 242 distinct neighborhoods.

A neighborhood of 138 acres along 17th Street between I-85/75 and Northside Drive, Atlantic Station is located on the former brownfield site of the Atlantic Steel Mill.

First planned in the mid-1990s and opened in 2005, Atlantic Station is a 24/7 dine-shop-live-work neighborhood composed of retail shops, condominiums, townhouses, apartments, and offices, including technology-forward, T3  West Midtown.

New South Construction was contracted to build the seven-story industrial warehouse office building, which features a sustainable heavy-timber frame and features one level of below-grade parking.

Limited Working Space
While the appealing location at the crossroads of Midtown and neighboring Westside offers an assurance of hustle and bustle, it put construction space at a minimum.

Christian Pitts, senior project manager with New South Construction, said of the site, “[It] had very limited space around it for material laydown, for deliveries, and for a traditional all-terrain forklift to maneuver around. We closed down one lane of the street to create a pull through lane for material deliveries to be unloaded off of the truck or trailer.”

Such tight site constraints, along with the specifics needed to make the project a success, led Pitts and New South Construction to consult with experts early in the project’s planning to determine what equipment would meet their needs. Those experts were Peachtree Equipment, located in Hapeville.

Pitts said, “We needed to reach the roof of the building, about 90′. A traditional all terrain forklift could not reach that high.” Brandon Burdett, manager of Peachtree Equipment, recommended the compact Merlo Roto 40.30 MCSS with 96′ lifting height, 360° rotating turret, and independent stabilizers.

One Rig Could Do Job from One Spot
Pitts said, “This one machine supplied the reach height we needed. Plus, the rotating turntable allowed it to stay in one location and pick materials off of the truck or trailer and place them into the building, or onto the roof.”

The rotating turret was particularly effective in the tight working space.

Also, the Merlo Roto had a platform that made managing debris removal a bit easier. “We were able to use a trash bin on the Merlo, as well,” said Pitts. “It let us unload trash and debris straight from the building into the dumpsters without moving the machine. That really saved time.” Pitts said the trash bin measured about 8’x4’x4′.

Other notable features included the independent stabilizers and automatic frame leveling. Together, they let the Merlo sit close to the building to safely accommodate placement of materials on this very tight jobsite.

Pitts noted, “This allowed us to create a much smaller area of stabilized stone for the machine to work from.” As work progressed along the two-year project timeline, the Merlo Roto 40.30 continued to deliver high  performance. In addition to citing the rotating turret, 8,800-lb. maximum capacity, and 96′ vertical reach, Pitts noted, “The 360° visibility around the machine was a selling point, too. It allowed us to operate more safely and see around the machine better.”

“Peachtree Equipment recommended the right machine from the start,” Pitts said. “The ability to function better than expected for handing materials on a very tight project site, and the savings from not having to have a crane onsite to handle materials allowed us to submit a lower bid on the project, which helped us win the project,” he added.

During eight months onsite, the Merlo typically operated 10 hours per day and was used about 80% of the time. It often had to be reserved, as it was used by different trades throughout the day.

While New South Construction had a dedicated operator running the machine 50% of the time, other  subcontractors on the site had operators who were certified to use it as well.

Pitts added, “It was fun to drive and operate. The 360° view eliminates the blind spots that you usually find in a traditional all terrain forklift. Sitting higher above the wheels, the ease of steering and driving, and more visibility made it fun to drive around the site. This is an extremely versatile machine.”

As commercial development continues and space availability shrinks, expect to see more of the Merlo Roto gracing worksites throughout the booming Atlanta districts.