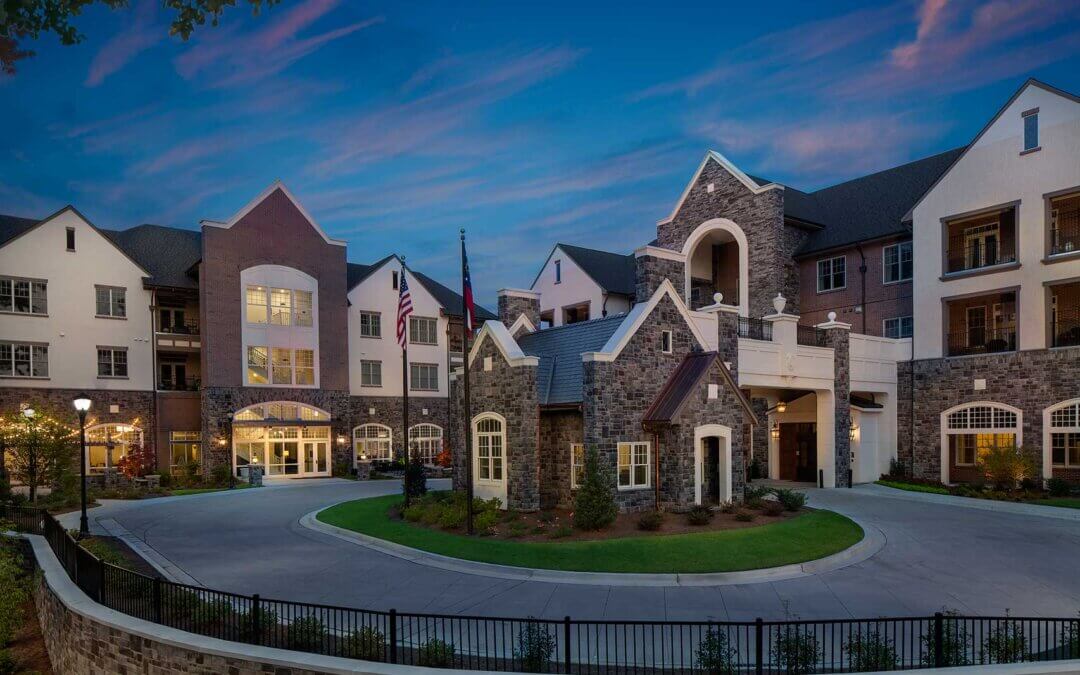 This article was written and published by Senior Housing News online HERE on February 26, 2021.

Located on the campus of a continuing care retirement community (CCRC) in the Atlanta neighborhood of Buckhead, Peachtree Hills Place caters to older adults who want to downsize and desire the security of senior housing, but still want to own their dwellings.

Peachtree Hills Place eschews the idea of a typical entrance fee and instead offers membership to the community, which includes both a private club with a variety of amenities and access to health care on a fee-for-service basis. The community caters to older adults who want to maintain the active, high-end lifestyles they led before they moved in, according to Andy Isakson, managing partner of Peachtree Hills Place’s owner and operator, Isakson Living.

“As a condominium project, it’s at the top of the market here in Atlanta … and our club is comparable to any of the high-end country clubs,” Isakson told Senior Housing News. “And then you add on to that the life care proposition of having health care there on site, should you ever need it.”

The planning process for Peachtree Hills Place began nearly two decades ago. Isakson originally put the 55+ community’s site, a former apartment complex, under contract in 2003. Within a few years, Isakson Living and architectural firm Foley Design had landed on a final design for Peachtree Hills Place, and the project was moving steadily ahead with marketing until it hit a wall: the beginning of the Great Recession.

As home values plummeted and financial distress spread across the country, Isakson put the Peachtree Hills Place project on hold. Then in 2014, the project was resurrected with some changes from the previous design.

“It was a good project both times,” Isakson said. “The first time was poor timing, and the second time was good timing. But we did learn some things.”

Though the project was successful in the end, it did encounter some challenges during the design process, such as an uneven site, according to Bryce Jennings, a principal with Foley Design who worked on the project.

“The building site … slopes tremendously, and it’s probably a 60- to 70foot drop from one side to the other,” Jennings told SHN. “Trying to figure out how to bring people in and approach the building and set up views was quite a puzzle to figure out, but it all worked out really well.”

The iteration of Peachtree Hills Place that exists today is slightly larger than the first design, with plans for 197 condos spread across five four-story buildings alongside 12 custom-built, single-family homes.

Welcoming residents into the community is a covered porte cochere and guardhouse that serves as a grand entryway. The building’s exterior design is reminiscent of Tudor architecture, and its interior carries an air of sophistication with custom artwork, natural stone, warm colors, stained wood, large doors and oversized transom windows.

“It’s not just the architecture, it’s the furniture, it’s the artwork and it’s the sculptures,” Jennings said. “Put all those things together, and it starts to become a much more grand clubhouse feel.”

Other community amenities include a central courtyard; rooftop patio; a ballroom that can serve multiple purposes; a fitness center with an indoor pool, Pilates studio and hot tub; and a wellness center where residents have access to preventative health services. The 20-acre campus also has walking trails, a dog park and space for gardening outdoors.

Residents also have access to two regulation-size croquet courts — something that is a selling point among the community’s resident base.

“We found that they seem to all play croquet,” Isakson said. “So, when we redesigned the project for a second time, we saw that we could do two full-size croquet courts in the courtyard around the condominiums, and we did.”

In addition to buying their condos — providing a source of home equity — residents must also sign up to become members of the company’s private club. Doing so requires paying a one-time fee of $100,000 plus monthly payments after that.

“The club takes care of the amenities … and there is some income that comes our way that helps us manage it,” Isakson said.

Workers broke ground on Peachtree Hills Place in the fall of 2017, and the first phase opened in January of 2020. Construction on the first phase was smooth with a few weather-related delays, and the project is within its total budget of $272 million, Isakson said.

Much of that success is due to the fact that all of the project’s partners — including general contractor New South Construction and interior design firm The Interiors Studio — coordinated throughout the construction process to see it through.

“Everybody had to be very dedicated for a long period of time to get this thing done,” Jennings said.

Construction on the project’s second phase is currently underway, and is slated to open later this spring or in the early summer — a year earlier than what was originally planned due to the success of the project’s first phase.

Though the community’s first phase opened just before the start of the Covid-19 pandemic, it has sold well, and today is completely full. But getting there was challenging at times.

While Isakson Living had moved in about 25 Peachtree Hills Place residents before the pandemic hit, most of the company’s move-ins occurred in the midst of Covid-19. But a strong housing market throughout the resulting economic downturn also added to the project’s success.

“We closed with the majority of our units after Covid, and moved everybody in after Covid,” Isakson said. “But it did add a level of work and complexity.”

David Dillard, associate principal and senior living practice leader with HKS and a Design Awards judge, praised the project for its elegant design and feeling of exclusivity for residents.

“If the mission was to create a place like no other for residents with little financial restriction, this project delivers,” Dillard said. “I really like what the client and design team have accomplished.”

And Isakson says the community has impressed an even more important judge: the discerning older adults who make up the company’s client base.

“It’s a pretty tough customer here,” he said. “But it is a wonderful community that I’d put up against anything I’ve seen in the country.”