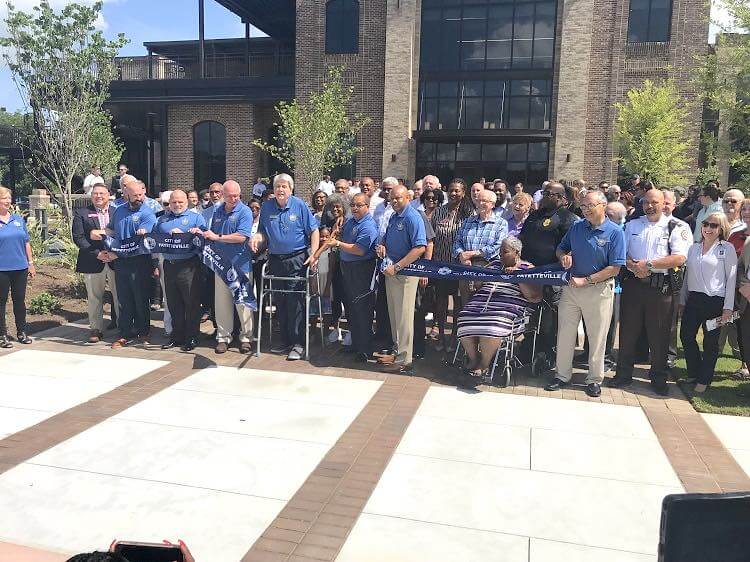 This article was written and published by The Citizen online HERE on July 16, 2021.

The council chamber at the new Fayetteville City Hall was filled to capacity July 14 for the facility’s official grand opening.

Adjacent to City Hall and immediately to the south is the new eight-acre City Center Park, which will open with a variety of activities throughout the day on July 17.

“This downtown has been an important meeting place for the much wider community for almost 200 years now,” said Mayor Ed Johnson, noting the five-year process that led to the completion of the new facility. “Our vision in building this new City Hall and City Center Park has been to raise the profile of our downtown district and to make it a place that is more accommodating, more entertaining and more enjoyable for generations to come.”

“There are so many people who worked hard to make this new City Hall and City Center Park possible, I can’t possibly name them all today,” said City Manager Ray Gibson. “I do want to say ‘thank you’ to everyone who helped us along the way, to make our vision a reality.”

City Center Park offers several water features, including a gentle flume, a splash pad and a pond, playgrounds for all ages and abilities, a dog park for large pets and small ones, three picnic pavilions and plenty of green space. The park will officially open on Saturday, July 17, at 10 a.m. with festivities planned throughout the day.

On the eastern edge of the park, the privately-owned Triumph Station is nearing completion, as developers renovate and rebuild the old school system bus barn and the historic Fayette County High School gym that were saved on the property.

On the southern edge of the park, Walton Communities has begun grading work on its multi-use residential development, which will complement the city’s efforts to create a new vibrancy in downtown Fayetteville, city staff noted.