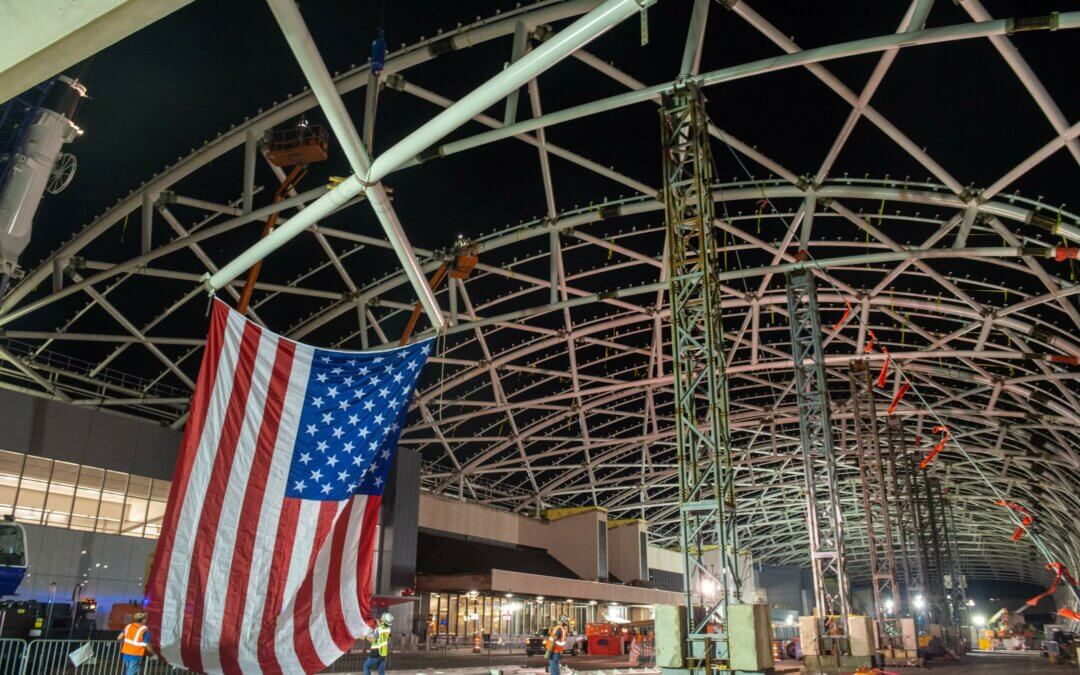 New South Construction, McCarthy Building Companies and Synergy Development Partners’ joint venture known as NSMS, along with Hartsfield-Jackson Atlanta International Airport (ATL), celebrated an important milestone – the installation of the final structural steel on the south terminal canopy and topping out of project. The joint venture broke ground on the project at the world’s most traveled airport in September 2016. The north side canopy was completed in October of 2018. The south side portion of the canopy project reached this milestone 32 days ahead of schedule, thanks to lessons learned from constructing the north canopy. The overall project is expected to be complete in April of 2020.

To celebrate the milestone, approximately 250 people gathered on April 29 for the erection of the final piece of steel. The construction crew, trade partners, and airport officials signed the final structural steel before hoisting it into place. Those in attendance included NSMS’ construction team, subcontractors, project architects, engineers, and ATL executives.

“We are thrilled to have reached another milestone in our expansive ATLNext capital improvement program,” said Tom Nissalke, assistant general manager for Planning and Development at Hartsfield-Jackson Atlanta International Airport.  “Additionally, I would be remiss if I didn’t point out our safety record and the standards by which our team has performed throughout the project. ATL boasts some of the safest statistics in the world, particularly for a project this size, and that is to be commended,” he said.

Consisting of 3,500 tons of steel covered in 19,776 square yards of lightweight, ethylene tetrafluoroethylene (ETFE), the canopies create a new iconic gateway for the City of Atlanta. With an average of 275,000 people traveling through the Atlanta airport every day, the canopies improve the passenger experience by protecting visitors from the elements and improving traffic flow with the planned addition of elevated walkways.

“We are excited to reach this topping out point and are pleased to be constructing such an architecturally interesting project that will offer a lasting legacy to Hartsfield-Jackson Atlanta International Airport and the entire city,” said Justis Brogan, senior project manager for NSMS. “This project has been challenging due to the unique design of this structure. We are looking forward to the next phase of the project.”

In addition to the canopies, ATL is modernizing the Central Passenger Terminal Complex (CPTC). NSMS is making upgrades to all 12 entrances and associated facades, lobbies and curbside check-ins, bringing the nearly 40-year-old terminal into the 21st century. This project is one of the first components of the ATLNext development program. The goal of the project is to bring convenience and connectivity to passengers as well as attract and grow business interest for ATL.

“Although we still have a way to go, the final structural member’s placement marks the successful completion of over three years of planning and execution of an extremely logistically challenging erection project,” said Dan Hobson, project director for NSMS. “General practice is to isolate the public from the construction process, however in our case, hundreds of thousands of passengers walk directly under it. In the future, as the canopies become an icon for the City of Atlanta, hopefully many folks will remember watching it being constructed and feel connected to it.”

Hartsfield-Jackson (ATL) is the world’s busiest and most efficient airport, serving more than 107 million passengers with nonstop service to more than 150 U.S. destinations and 75 international destinations in more than 50 countries. ATL boasts a direct economic impact of $34.8 billion in metro Atlanta and $64.3 billion for the region. The Airport is the largest employer in Georgia, with more than 63,000 individuals working on-site. ATL is a frequent recipient of awards of excellence for concessions, operations, sustainability, architectural engineering and construction. In 2016, ATL set in motion a multibillion-dollar capital improvement program, ATLNext, which will modernize the Domestic Terminal, extend two concourses, construct several parking decks, expand cargo facilities and pave the way for a new hotel. For more information, visit www.atl.com.

NSMS is a joint venture which provides extensive knowledge and working history at HJAIA combined with national aviation best practices. We believe, just as with a well-constructed building, a high performing project team begins with a solid foundation of trust. The team is structured to give the financial confidence and technical expertise of a large national builder, McCarthy Building Companies, partnered with respected and well-known local builders, New South Construction and Synergy Development Partners. The joint venture is dedicated to quality construction, customer service and community involvement and committed to delivering excellence.