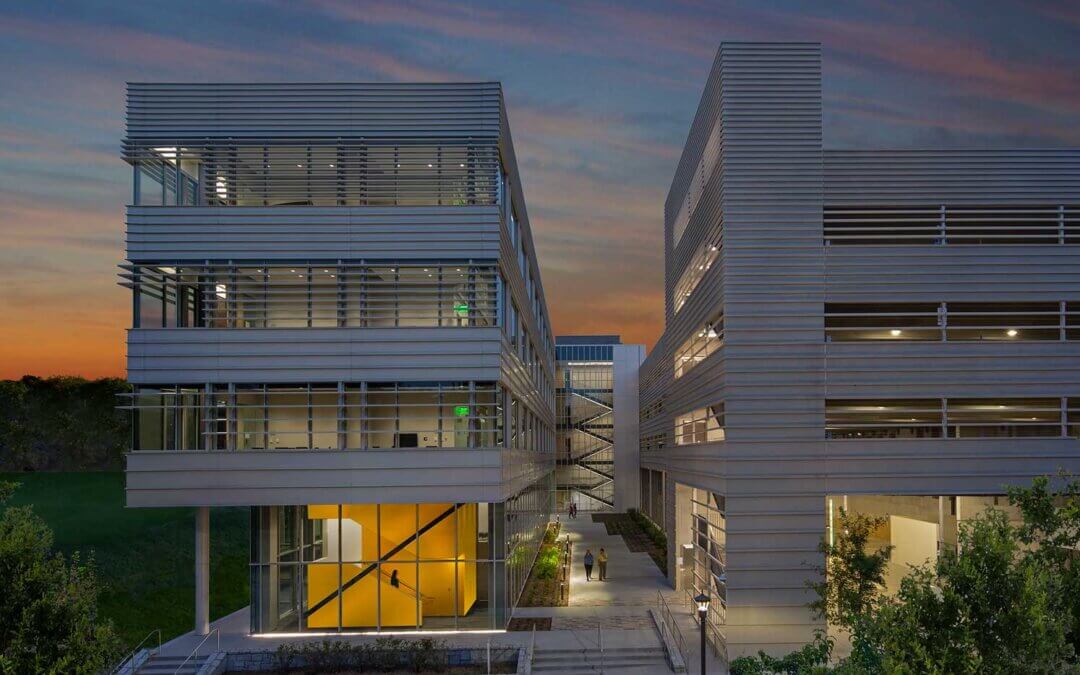 This article was written and published by Ron Nyren on UrbanLand online HERE on March 29, 2021.

In 2020, McDonald’s opened a restaurant targeting net-zero energy use in Orlando’s Walt Disney World Resort—as clear a sign as any that sustainable design has gone mainstream. Yet, as much as green principles and technologies have become more prevalent over the past decade, energy demand in buildings still rose 7 percent between 2010 and 2018, and buildings are responsible for nearly 40 percent of energy- and process-related carbon emissions, according to a 2019 United Nations Environment Programme report. Making sustainable practices even more widespread and reaching for deeper shades of green will be necessary to slow the building industry’s contributions to environmental harm.

The following 10 projects—all completed during the past five years—model an array of green design measures that go above and beyond the usual. They include an office building that generates twice as much electricity as it consumes; a student services building with an undulating, energy-saving aluminum roof; a library that welcomes daylight into 80 percent of regularly occupied spaces; and several buildings that meet the stringent energy performance criteria of the Passive House Institute—affordable multifamily residences in Chicago and the Bronx, New York; micro apartments in Philadelphia; and student housing just outside Melbourne, Australia.

RON NYREN is a freelance architecture and urban design writer based in the San Francisco Bay area.

Just outside Queen Elizabeth Olympic Park, the vegetated roof atop 2 Redman Place hosts not only native plants, but also bird and bat boxes designed by students at a local school. To further support wildlife, the facility also includes what is billed as London’s largest “living wall,” which comprises 21,500 square feet (2,000 sq m) of native plants. The facility’s rainwater harvesting system is estimated to save enough drinkable water each year to fill 4.5 Olympic-sized swimming pools.

Part of the new mixed-use business area known as International Quarter London, 2 Redman Place was designed by the local office of Rogers Stirk Harbour + Partners for the local office of Lendlease Development and completed in 2019. Tenants include Cancer Research UK, the British Council, and financial technology company FNZ. A triple-glazed closed-cavity facade provides high thermal performance and relies on integrated automatic blinds to control heat gain and maximize natural light. In addition to drawing energy from photovoltaic panels, the facility taps into the nearby Stratford Energy Centre district heating and cooling system.

With the goal of creating the most daylit library in the country, the joint venture of Lake|Flato Architects of San Antonio, Texas, and Shepley Bulfinch of Boston organized Austin Central Library around a six-story glazed atrium. The design team created a four-foot-tall (1.2 m) scale model of the atrium, brought it to a park, and fine-tuned it to ensure a bright but glare-free interior. A roof overhang and perimeter light shelves provide shading, and baffled clerestory windows reflect light off a plaster ceiling. Solar panels shade the publicly accessible rooftop butterfly garden. Screened outdoor reading porches offer views to Shoal Creek and Lady Bird Lake.

In drought-prone Austin, water conservation was key. The brownfield site is part of the Seaholm EcoDistrict, the mixed-use redevelopment of a former power plant. The design team pressed a nearby former underground vault, owned by the city utility, into service as a 373,000-gallon (1.4 million liter) cistern that collects water for drip irrigation and toilet flushing. The library opened in 2017.

Local developer/architect/builder Onion Flats has been redeveloping a site in Philadelphia’s Northern Liberties neighborhood over the past two decades. The first phase adapted a meat packing plant into an eight-unit apartment building; the second phase consists of eight duplexes topped by a green roof and solar thermal panels. The third phase, the Battery, adds 25 micro apartments designed according to Passive House standards, consuming 80 percent less energy than a conventional counterpart.

Completed in 2017, the Battery achieves its sustainability goals through strategic solar orientation; geothermal wells that deliver heating, cooling, and hot water to all units; a vegetated roof; an airtight building envelope with triple-pane windows; centralized energy recovery ventilation; and a photovoltaic roof canopy designed to meet all of the building’s energy needs on an annual basis. White panels on the facade are illuminated by light-emitting diode (LED) lights that glow green when the building’s energy performance goes as planned, yellow when it starts veering from the ideal, and red when energy use is too high.

As part of the Georgia Institute of Technology’s plans to reduce on-­campus stormwater runoff by 50 percent, the research university is creating the Eco-Commons, which will ultimately comprise 80 acres (32 ha) of green space along original stream paths that existed before the land was developed. The first phase, which is underway, consists of eight acres (3.2 ha) of traditional Piedmont woodland. The university freed up five of these acres (2 ha) by replacing surface lots with an 800-car parking garage as part of the Dalney Building, completed in 2019.

Designed by New Orleans, Louisiana–based Eskew Dumez Ripple, the 303,000-square-foot (28,000 sq m) Dalney Building provides office space for more than 250 staff members, as well as a conference facility. The facility will filter rainwater captured from neighboring buildings and accommodate a biological wastewater reclamation facility to treat blackwater for nonpotable use throughout the campus. Projected to consume 65 percent less energy than the benchmark set by Architecture 2030’s 2030 Challenge, the building features a roof designed to support more than 800 kW of photovoltaics.

Gillies Hall combines the use of cross-laminated timber (CLT), which sequesters carbon and provides excellent insulation, with an airtight building envelope to achieve Passive House certification. Jackson Clements Burrows Architects of Richmond, Victoria, exposed the CLT structure throughout the six-story building, which includes 150 studio apartments organized into two 15-room wings on five floors. Each floor has a communal kitchen, lounge, and study area to encourage interaction.

The small coastal city of Half Moon Bay is known for its beaches and its surf-friendly waves. In response to regional growth, the city partnered with the County of San Mateo to replace its outdated library with a new facility that would meet future needs and celebrate the area’s agricultural roots. Noll & Tam Architects of Berkeley, California, minimized the building’s apparent mass by breaking it into two smaller volumes, each one story above street level, with a two-story volume at the rear. Natural, durable materials such as wood, stone, and patinated copper harmonize with the coastal surroundings.

Designed to achieve net-zero energy use, the library is equipped with a high-efficiency building envelope, high-performance mechanical systems, operable and automated windows, a radiant floor heating/cooling electric heat pump system, heat-recovery ventilation units, deep overhangs, and high levels of insulation. A photovoltaic array supplies all of the library’s electricity needs. Rainwater is filtered through bioswales, a bioretention planter, and a vegetated roof. Located close to bus transit, the library opened in 2018.

New York City–based Curtis + Ginsberg Architects designed Park Avenue Green to use 70 percent less energy than a conventional counterpart, with a highly insulated, airtight building envelope; high-performance windows and doors; energy-efficient lighting and appliances; and energy recovery units. Rooftop photovoltaic panels supply power, along with a cogeneration microturbine that serves as the main hot water heater and doubles as an emergency generator during power outages. Completed in 2019 for affordable housing developer Omni New York of New York City, the building fits onto an irregularly shaped site and references neighboring warehouses in its form.

Trondheim is so far north of the equator that the amount of daylight each day varies from 4.5 hours in winter to 20.5 hours in summer. Despite this, Powerhouse Brattørkaia produces, on average, twice the electricity it consumes each day, serving as a microgrid that powers neighboring buildings as well as electric buses and cars. The goal of capturing solar power shaped the office building’s sharply sloping roof, with photovoltaic panels covering nearly 32,000 square feet (3,000 sq m) of the roof as well as portions of the upper facade.

A glazed atrium brings sunlight deep into the 194,000-square-foot (18,000 sq m) building’s floors and serves as a public garden. The public can also visit the café and visitor center on the first floor and learn about the building’s energy features. Extensive insulation and heat recovery systems conserve energy, and the heating and cooling rely on a water-to-air heat exchange system that leverages the stable temperature of water deep in the adjacent harbor. Oslo-based Snøhetta completed the building in 2019 for Oslo-based developer Entra.

The wavy standing-seam aluminum roof of Cal Poly Pomona’s new student services building not only references the rolling foothills and nearby San Gabriel Mountains, but also reduces the building’s energy use per square foot per year to half the usage of an average building of comparable size. The facility consolidates previously scattered student services into a new building. In designing the three-story, 140,000-square-foot (13,000 sq m) building, Los Angeles–based CO Architects performed solar studies to inform the roof’s shape. Perforated metal overhangs, which vary in size depending on orientation to the sun, shade the reflective glass curtain wall.

The highly insulated roof reflects sunlight to mitigate heat gain. Skylights help illuminate the top floor, and open offices extend across the floor plates to receive plenty of natural light. The roof also shades a pedestrian breezeway that passes through the building’s main volume and its two-story wing. Seating and gathering spaces along the breezeway provide a place for students to stay cool in hot weather. A bioswale filters stormwater for irrigation. The building was completed in 2018.

Tierra Linda is the first sustainability-oriented development created by the Latin United Community Housing Association, a Chicago-based nonprofit affordable housing organization. Scattering 45 affordable apartments along the 606 trail through the city’s Humboldt Park and Logan Square neighborhoods, it includes a six-flat building certified by Passive House that houses six low-income families and was completed in 2018.

Local firm Landon Bone Baker Architects designed the Passive House flats with high levels of insulation and an airtight building envelope. To make this possible required obtaining special permission from the city to install the energy recovery ventilation system, because it was not recognized by the building code. Each unit has an indoor bike rack to encourage residents to use the trail for cycling. The building has a “twin,” a six-flat counterpart that is identically laid out and built to the federal Energy Star standard but lacks the Passive House measures. Both buildings are monitored for energy use to enable compar