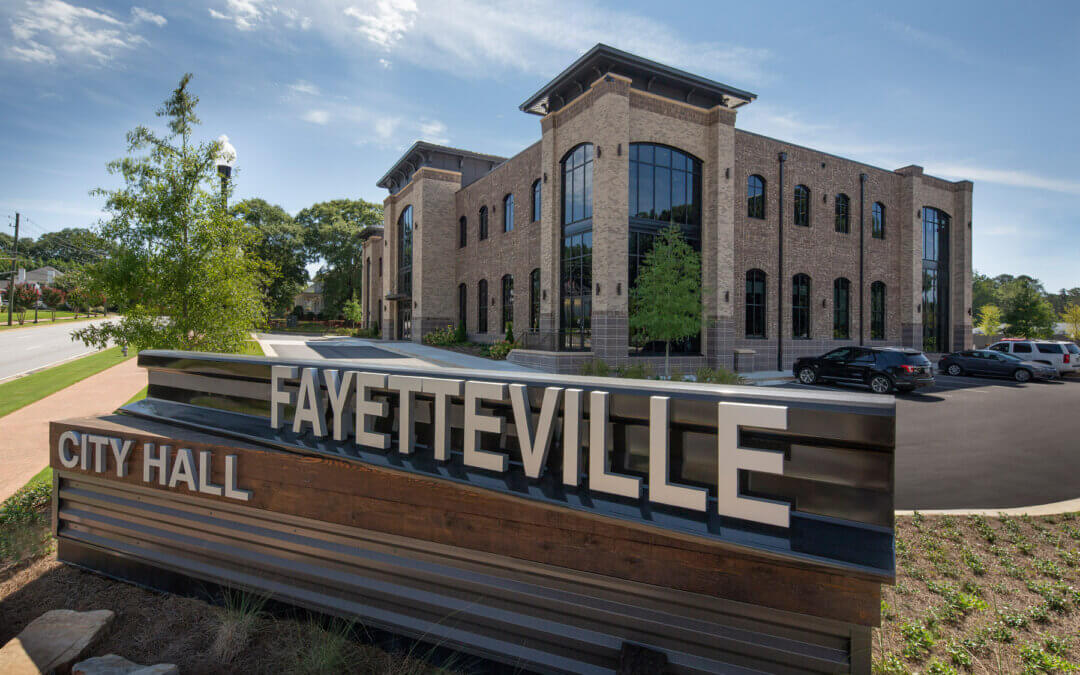 The article was written and published by Living in Metro Atlanta on November 16, 2021. You can view it HERE.

After nearly five years of dreaming, planning, and building, the City of Fayetteville now has new government headquarters – and the community gains access to a vibrant city center where residents can relax, play, and gather.

The initial idea was to build the city’s first purpose-built City Hall. But the project evolved into a more elaborate, community-focused effort to revitalize the aging downtown that features a new City Center Park and repurposed historic buildings.

“This downtown has been an important meeting place for the much wider community for almost 200 years now,” said Fayetteville Mayor Ed Johnson. “Our vision in building this new City Hall and City Center Park has been to raise the profile of our downtown district and to make it a place that is more accommodating, more entertaining, and more enjoyable for generations to come.”

The new City Hall and City Center Park are the winner of ARC’s 2021 Regional Excellence Award for Livable Center.

A space to thrive

This ambitious project, made possible thanks to public-private sector collaborations, creates a new space where both residents and businesses can thrive.

The project was a catalyst for ARC’s Livable Centers Initiative study of the downtown, which is being finalized now.

The 34,000-square-foot City Hall and City Center Park are located on the former site of the Fayette County Board of Education headquarters and the original Fayette County High School gym and football field. City Hall has a large balcony that overlooks the new park.

The historic Fayette County High School gym is now being renovated as an upscale event center, and the old Board of Education bus barn is being rebuilt as a microbrewery, restaurants and event space. Behind City Hall, a mixed-use rental development is being built, all part of the downtown master plan.

City Center Park now connects with the Fayette County Library. Encouraging economic activity in the downtown district is embedded into the plan for this space.

Within City Center Park, the Great Lawn provides opportunities for community engagement and play, while the Serpentine Garden and meandering flume offer spaces for quiet reflection. Walking paths, sidewalks, and seating areas are abundant, as are picnic pavilions. Children’s activities include playgrounds and a splash pad.

The project is sparking economic activity. Around the park, new businesses and restaurants are already coming online.

Years in the making

The vision for Fayetteville’s new City Hall and City Center Park began almost five years ago. City Hall was then located in an old schoolhouse, and prior to that, in a renovated home. Over the decades, as the city’s population grew, it outgrew those facilities.

In 2016, Fayette County residents adopted an additional one-penny sales tax for community improvements, and a portion of those funds was allocated for greenspace acquisition and engineering studies.

When the city updated its comprehensive plan in 2017, residents overwhelmingly expressed a desire to reenergize and revitalize downtown into a walkable, mixed-use area. The downtown land-use classification was then changed to “walkable mixed-use,” which was intended to establish pedestrian-oriented spaces where residents and visitors could live, work, and easily walk from place to place.

One of the greatest challenges was finding land centrally located in downtown to accommodate a new City Hall building. The city put those SPLOST dollars toward purchasing the former Fayette County Board of Education property.

Construction started in 2019 and happened mostly during the pandemic. The new City Hall and City Center Park opened this summer.